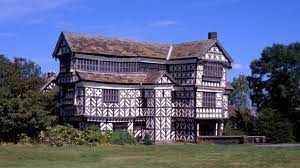 As Tudor houses are so old, they have often been tweaked over the centuries, making it a little difficult to define them. Tudor houses may also qualify as Georgian houses, or Queen Anne houses, depending on the extent to which they have been modified or even completely rebuilt. Due to this, finding examples from hundreds of years ago can be a little challenging – or at least a matter of debate. It is subjective to determine how much of a house has to be considered “Tudor”: do Tudor foundations count? During a later rebuild, did you find a Tudor fireplace in situ? Maybe not. Despite this, there are still plenty of examples to point to. Generally, the larger and more opulent the house, the more likely there are to be records of when it was built, so stately homes are a good place to start.Styles developed during the Tudor period, which lasted from 1485 to 1603. In the

early era, Athelhampton near Dorchester was characterized by a horizontal focus in its architecture and a great hall (Athelhampton’s was built in 1493). The Hardwick Hall, built from 1590-97 for Bess of Hardwick, likely the richest woman in the realm after the queen, has a vertical focus, with long, tall mullions and 12-panel windows, as well as towers at each corner. Hardwick Hall is an example of a “prodigy house”, or a deliberately showy house built in the Elizabethan era specifically to house the monarch and her train as she travelled around the country (the monarchy was peripatetic throughout the Tudor era, meaning she often traveled throughout the realm).

Generally speaking, houses from earlier in the period look more like stout Medieval manor houses (obviously), while those built later are lighter and more refined, indicating how tastes were gradually changing towards ornate details that would eventually develop into the early English Baroque.

As England’s ties with the Low Countries deepened for various geopolitical reasons, brick architecture also emerged. With decorative chimney stacks in rows of four, brick houses were built by the gentry like those in Ghent and Antwerp. Although brick was seen as exotic at the start of the period, it kept houses warmer than traditional stone during the “Little Ice Age.” In addition to leaded windows and oriel windows, Tudor buildings are also known for their “Tudor arch”, a type of low, slightly flat arch with a low Examples include the gatehouses of Trinity College, Cambridge, and Hampton Court Palace, both founded by Henry VIII.

One of the most famous vernacular architectural styles within the Tudor era is the half-timbered building. It is best known for its modern descendant, the questionably tasteful mock-Tudor style, although it was a popular building style throughout the era, replacing wattle-and-daub structures among those who could afford it. It is most likely that these houses today are those you would see on the market, and they might have belonged to the emerging middle class – a banker or merchant in London or certain officials in small towns across the country.

The best way to decorate it

Architectural historian Oliver Gerrish suggests a contemporary (to the era) approach to decorating a Tudor house. You can create warmth and comfort in Tudor and Elizabethan interiors by using tapestries and textiles, something they frequently did. Tapestries from the Renaissance period are available from a variety of modern companies. Edwin Lutyens and Baillie Scott created Tudor/Elizabethan-style modern interiors using Arts and Crafts designs.

Your house’s colour scheme should be taken into consideration. An oak beam that likely supports the internal structure and highly patterned textiles, as well as tiling, help enliven a Tudor hall with gilting. Give a focal point, such as a brick fireplace or carved piece of paneling, room to breathe and build furniture around it. As Oliver suggests, Arts & Crafts and other Victorian designers can provide good ideas on how to modernize a Medieval- or Tudor-style building.

Wollaton is in the Midlands, just outside Nottingham, like many other notable prodigy houses. Originally designed for local magnate Sir Francis Willoughby in the 1580s, it is an example of Tudor architecture at its end, with Jacobean elements visible throughout. The decorative hammerbeam hall (an open-timber design that harks back to much earlier Medieval halls) is an original highlight among interiors significantly remodelled by the later Willoughbys.

Just to learn about Bess of Hardwick herself, Hardwick Hall is worth a visit. She was born Elizabeth Hardwick into a relatively unimpressive family Through four marriages, including one to Mary, Queen of Scots’s jailer George Talbot, the Earl of Shrewsbury, she rose to the highest echelons of English society (she is a distant ancestor of the current Queen). Hardwick Hall itself was designed by Robert Smythson, who was likely also the architect behind Wollaton.

Little Moreton in Cheshire is (just barely) more toned-down than Hardwick and Wollaton Halls, but is the best place to go for that black-and-white timbered look so particular to the Tudor era. Constructed in the early years of the 16th century, it was owned by the Moreton family for nearly half a millennium before the National Trust took ownership of it in the 1930s.

Despite being privately owned, Athelhampton is open to visitors who travel to Dorset to see its hammerbeam roof and stained glass, as well as the Elizabethan-style gardens. Athelhampton is one of the earlier examples of a Tudor house, built in the 1490s barely a decade after the Battle of Bosworth Field, which ensured the accession of the Tudors to the throne.

One for Londoners, Sutton House is a large Tudor manor house on Homerton High Street in Hackney, once owned by Thomas Cromwell’s apprentice and Henry VIII’s chief secretary Sir Ralph Sadler. It is the oldest residential building in Hackney, and a good example of Tudor brick building.